First recorded use of paper money was in China in the seventh century. The practice did not become widespread in Europe for nearly a thousand years. 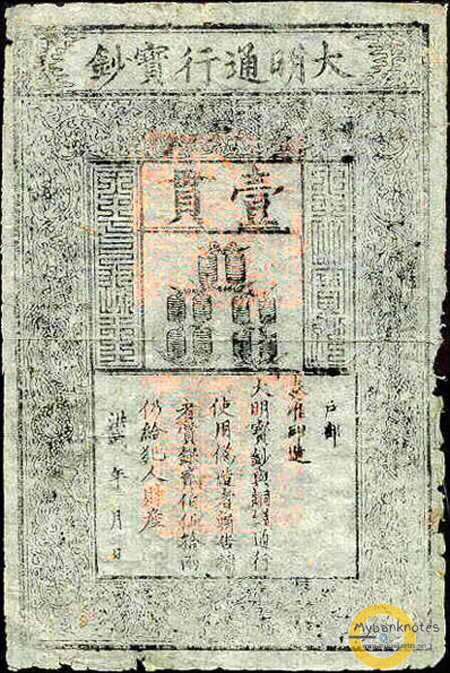 The goldsmith-bankers began to accept deposits, make loans and transfer funds. They also gave receipts for cash, that is to say gold coins, deposited with them. These receipts, known as “running cash notes”, were made out in the name of the depositor and promised to pay him on demand. Many also carried the words “or bearer” after the name of the depositor, which allowed them to circulate in a limited way. The similar phrase “I promise to pay the bearer on demand the sum of ….” still appears on British banknotes today.

In 1694 the Bank of England was established to raise money for King William III’s war against France. The Bank started to issue notes in return for deposits. These notes were initially handwritten on Bank paper and signed by one of its cashiers. Today, all British banks carry the chief cashier’s signature. After 1696, it was decided not to issue any notes worth less than £50 and since the average income then was less than £20 a year, most people went through life without ever coming into contact with banknotes.

The move towards fixed denomination notes started in the 18th century and from 1725 the Bank was issuing partly printed notes for completion by hand. The £ sign and the first digit were printed but other numerals and details were added by hand. By 1745 notes were being part printed in denominations ranging from £20 to £1,000.

In 1759, gold shortages caused by the seven years war forced the Bank to issue a £10 note for the first time. The first £5 notes followed in 1793 at the start of the war against Revolutionary France. In 1797 the uncertainty of the war caused a series of runs on the Bank and drained its bullion reserve. It was forced to stop paying out gold for its notes and instead it issued £1 and £2 notes. The Bank’s nickname “the Old Lady of Threadneedle Street” has its roots in this so-called “restriction period” when gold reserves were short.

Cashiers were finally relieved of the task of signing each note individually in 1853 when the first fully printed notes appeared.

The first world war broke the link between notes and gold once again. The government needed to preserve bullion stocks and so the Bank stopped paying out gold for its notes. In 1914 the Treasury printed and issued 10 shilling and £1 notes. The gold standard was partially restored in 1925. Britain left the gold standard in 1931 and the note issue became entirely backed by securities instead of gold.

Since 1970, the Bank’s notes have honored “great Britons”, including scientist Isaac Newton, composer Edward Elgar, and nurse Florence Nightingale. Final say on these historical figures went to the Bank governor.

The world’s first polymer notes began to appear in the 1980s although there were some teething problems with ink sticking to the surface. Australia issued a polymer $10 commemorative banknote in 1988 to mark its bicentenary and went on to become the first country to use solely polymer notes.

Former governor Mervyn King’s announcement that Sir Winston Churchill would be appearing on British banknotes, most likely in place of social reformer Elizabeth Fry, sparked anger at the disappearance of all female historical figures from notes. New governor Mark Carney responded with an announcement that Jane Austen would appear on future notes and he also launched a review of the selection process for such characters “to ensure that our notes represent the full diversity of British people”.