According to De La Rue’s Creative Design Director Julian Payne, “It was such an honour to create the artwork for this commemorative note celebrating such a respected global icon. Inspired by the life and legacy of Nelson Mandela we wanted to follow his journey through the five denominations. The designs tell a story of hope and reconciliation triumphing over division and persecution; the prisoner becoming president is a truly inspirational story”.

Commenting on behalf of SARB, meanwhile, Pradeep Maharaj said: “Nelson Mandela is a unifying figure, with whom all South Africans can identify, and the telling of his life through the banknotes will resonate throughout the country. We are proud to honour him in this way and would like to thank those involved in the project and for their part in supporting our centenary celebrations”. Accompanying the new notes is a commemorative R5 coin – the third such coin celebrating Madiba (the first was issued in 2000 after his presidential term and the second in 2008 for his 90th birthday). The 2018 bimetallic coin incorporates a latent image (the first for a South African coin) and a weaving pattern inspired by the shirts that Madiba used to wear. 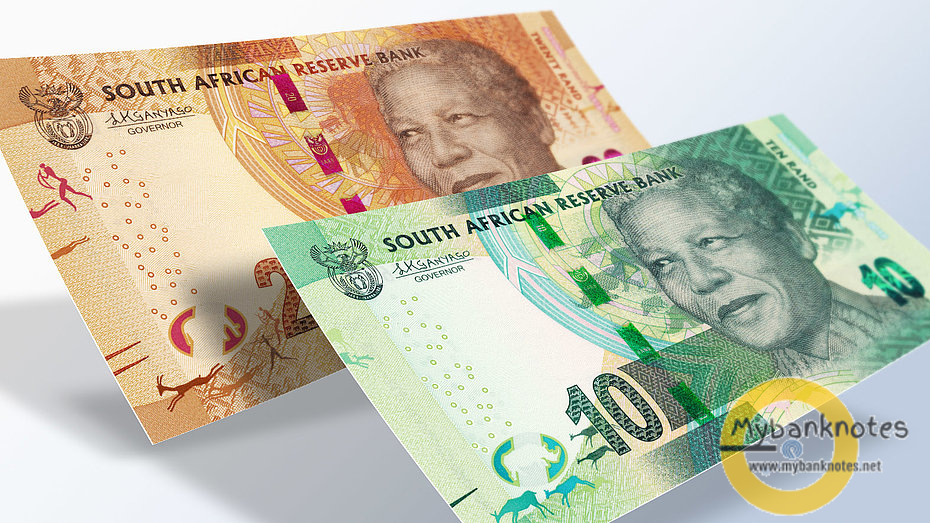 SARB has undertaken an extensive publicity campaign (‘The Madiba in Me – remembering the values that live within us all’) to familiarise the public with the new notes and coin and engender national pride in Mandela’s achievements. As part of this, it has launched a special app demonstrating the features and explaining the designs and their symbolic significance.

The front of the commemorative notes is the same as the existing series, with Nelson Mandela’s portrait and watermark, colour shifting thread and a large denomination numeral in either OVI or SPARK depending on the denomination.

On the reverse, however, the images of the iconic ‘Big 5’ animals have been replaced with different scenes and accompanying themes telling the story of Mandela’s life from young boy to president, marking key passages and historic milestones.

The R10, for example features the village where he was born (Birth), and the R20 the home in Soweto where he began both his career and his campaign against apartheid (Life). The background to the R50 is the place where he was taken prisoner (Capture), and the R100 Robben Island, where he was incarcerated for 18 of the 27 years he spent in captivity (Struggle). The highest denomination R200 depicts the Union Building where he was inaugurated as President in 1994 (Destiny). The notes were designed by De La Rue and printed by the South African Banknote Company. 400 million notes have been produced. The two lowest denominations – the R10 and R20 – are printed on Louisenthal’s Hybrid™ paper/polymer composite substrate, while the others are on varnished cotton paper.

The new notes and coin were launched at a special ceremony at the historic Freedom Park in Pretoria, hosted by SARB Governor Lesetja Kganyago, and attended by members of the Mandela family, Minister of Finance Nhlanhla Nene and other government officials. Also in attendance were members of the country’s cash management industry, representatives from central banks in the Southern African Development Community region, the Nelson Mandela Foundation and other special-interest groups. Five days later, on 18 July (Mandela’s birthday), the notes went into circulation.