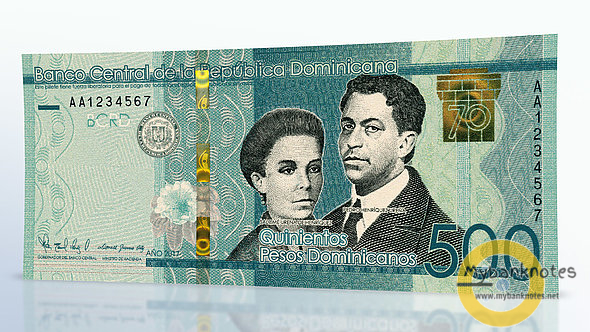 To celebrate its 70th anniversary, the Central Bank of the Dominican Republic issued a commemorative $500 banknote last October, the first note to include Louisenthal’s optically variable Galaxy® thread. It also issued two versions of a special commemorative $70 peso coin.

The key difference is the change in the security thread. As mentioned, the commemorative $500 banknote features Louisenthal’s Galaxy security thread, the first note issued by a central bank to do so. Shown on the front of the note alongside the OVI feature, the thread features the ‘Saturn’ version of Galaxy whereby three circular patterns appear to move in a 3D effect and change color from gold to green when the banknote is tilted, complementing the design used in the SPARK feature.

The other difference seen on the front of the commemorative note is the design of the optically variable ink (OVI) feature using SICPA’s SPARK® Truespin technology. It displays the numeral ‘70’ within an icon illustrating the central bank’s building, which is considered one of the best examples of modern Dominican architecture. When the note is tilted, the colour of the ink changes from gold to green in an orbiting circular style.

Speaking at the launch of the commemorative banknote, the Governor of the Central Bank of the Dominican Republic, Héctor Valdéz, said that it is the first use of an icon depicting the building, following a trend set by other central banks around the world, helping to reinforce the Bank’s visual identity and promote its strength, credibility, and institutional reputation.

According to Louisenthal, optimal security when using the Galaxy thread is reached through the integration of its ColourShift effects into a multi-layered structure, which combines to provide a highly attractive and user-friendly feature. The motifs appear at various depths on the foil and the graphic elements can be viewed from all angles, producing a three-dimensional image with 360° authentication.

The remaining security features used on the note continue to be the same as the previous version of the note, including a latent image, tactile feature for the visually impaired, watermark, micro text and iridescent ink.

The commemorative $500 is considered by the Bank to be a circulating banknote alongside the 2014 version. All of the 2014 series, and the new note, are produced on cotton-based paper. A polymer $20 note was issued in 2010, but did not form part of the 2014 series, as it was withdrawn from circulation.

Together with the commemorative banknote, the Bank also issued commemorative $70 coins in gold and silver. Both versions have the same design, with the Bank’s new logo on the front depicting its headquarters, and, on the reverse, the Dominican Republic coat-of-arms, the value of the coin and the 70th-anniversary logo. Further information is available on the website of the Central Bank of the Dominican Republic, and Youtube.